stuck in the middle with clowns

"Clowns to the left of me, actually they're to the right, here I am stuck in the middle with clowns" 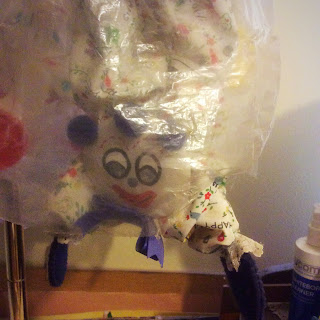 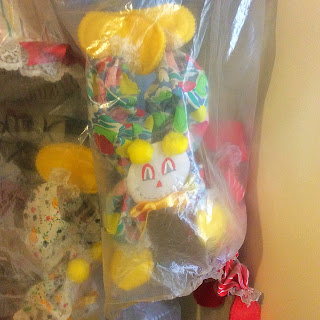 Its not just that I share my office with clowns that disturbs me, its that the clowns are smothered in plastic sheeting and they are really angry about it. I don't like clowns, that doesn't help either, I think they know it. THEY KNOW EVERYTHING.

The clowns aren't mine, they were handmade by my mother about 25 years ago as a series of baby mobiles that she never sold, and stopped making, and here they are, haunting my office, hanging around in the corner with dust sheets over them and their big eyes staring at me all the damn time.

There are 6 clowns right now, in my office and there's nothing I can really do about it. I had a photographer from a newspaper come to take photos of me in my office, and I had to say, hey, let's shoot this way so you don't get the creepy ass clowns in the background, and he looked in the corner and shuddered. He took a couple of photos in my office and then said "let's go outside to shoot" voluntarily making his job of photographing me and my jewellery designs almost 100% more difficult just to get away from the clowns.

We recently had a technician sent to our house by our internet provider and I left him sitting in my office chair facing my computer, when I came back he had turned the chair. Now, turning the towards the hallway would have allowed him to stretch his legs out and easily see me if I returned, but he turned the other direction, a rather unnatural and unusual choice but it meant he was facing the clowns, no way were these sick bastards going to sneak up on him!


They won't sneak up on me either - my dog sleeps in my office overnight, and he has my permission to tear them to shreds if they give him any provocation.

So how do you feel about clowns? Just in case you're not too fond, I have a bonus story to end with, about how my mum nearly flashed the Telstra tech when he was here.....

I was sitting at the dining table with my Mum, in the afternoon and she was complaining about it felt like she had an ant in her bra, after she'd been in the garden. I was doing some work and then the next thing I know, I look up and my nearly 80 year old mother had her shirt pulled up at the table, to her credit she did find an ant in there, however I was completely shocked, I said "don't forget there's someone here" and I swear, 2 seconds after she put her shirt down the guy walked in. I was nearly dying from not screaming with laughter.