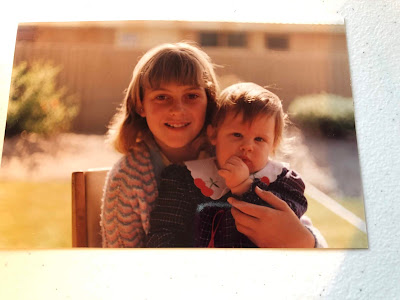 It would be fair to say that my mother and I have had our fair share of power struggles, but a recent flick through our family album has brought memories of one of our more unusual battles to light. Childlike stubbornness was never outgrown by my mum, and of course I am a strong person myself - strong but wise on most occasions. I was always a little more dignified than my parents with a sophisticated way of expressing my opinions (that didn't need to resort to the passive aggressive play book favoured by mum)

Which is why I'm absolutely pissing myself laughing about the time I made my mum shave my arm pits.

Not so sophisticated now, right?

But how could a mother end up being forced to shave their daughter's underarms and could you ever lose power so much that this could happen to you? Nah, it won't happen to you, because you probably would have course corrected and come to an easier solution.

You probably aren't slaving over the making of "going out" outfits for your kids (although I must wave hello to my Etsy friends who may be the exception to this, although running your own businesses you probably dress everyone else's kids before your own) but had you slaved over a nice sleeveless dress for your daughter only to discover before a family party that said daughter had developed a small forest in their underarms you probably wouldn't try and force them to wear the dress, at least not after they turned their mortified face to you and said "I can't wear that"

Honestly I am quite fortunate to have buried this story in the darker recesses of my mind until now, when I am of course, pissing myself laughing about mum and I screaming at each other about whether or not I would wear that dress

I can recall the words "no one will care" and hey, free parenting advice, if your kid is really upset about something, saying no one cares, or no one will care, or no one will notice are all things that make them feel like they are no one because believe it or not they care, very much, and are telling you they do. From their little heart to yours, and I know you can't cater to your child's every whim, but at least don't say their feelings don't matter. But you knew that right?

So it won't be you that ends up losing a heated battle and having their daughter scream "shave my arm pits!" before driving a long way to a family party and having them never take their cardigan off the whole time (yep can't even see that dress huh?) and you won't spend your life feeling like you are their body servant, although I believe you may feel like that for the first few years of diapers, bathing, dressing, and bottom wiping. But that's why mum's drink isn't it?

And that's the story behind this family portrait of me holding my first niece, who is now a new mum of a beautiful little boy named Owen, and may their power struggles be few and far between, but may they be fantastic and hilarious and easy to forgive when they do come.

Posted by Starry Strange at 2:42 AM No comments: 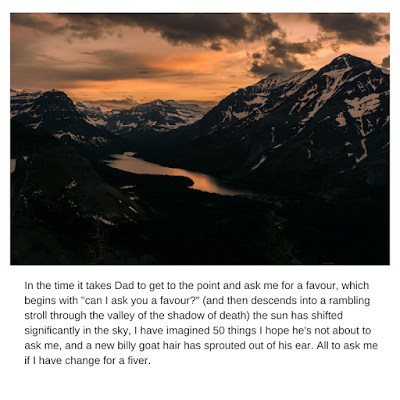 I'm in the trenches every day, first hand witness to the decline and change in my parents, something many people prefer not to witness when it comes to their elderly relations. I'm not here to condemn anyone who decides that living with their aging parents is not for them - there are many reasons why its a wonderful thing to do and many more reasons why its probably not the greatest idea in the world.

I wrote about role reversals in the parent child relationship in the post Every day is Freaky Friday and one of the greatest changes you'll note, besides the increasing feelings or protectiveness you have over your parents (its like having the world's oldest children "don't touch! hot! Don't climb on the shelves to reach something! Put the axe down now....") is that while they once monitored and assessed your development, you are now constantly appraising their declining abilities. The social niceties can be the first to go. Table manners of course fall by the wayside. The ability to assess what is and is not interesting, what is and is not important, and they probably lost their memory 30 years ago we just weren't there to observe its departure.

The constant losing of keys is one of my great stresses, its mostly Dad, but this one time with Mum last year was particularly stressful, here is my Facebook post from that night:  hello Barkeep, I need copious amounts of alkyhol, I know you don't know me, that's because I don't usually drink. And I don't care what you bring me I just need to blot out that my 80 year old mother lost her keys half way through locking the house up, and whatever can obliterate the screaming as my mother tries to explain (for the one billionth time) to my Dad that the keys are not out the front or in the garage she's quite sure because she locked the front door and then lost the key, and the door is locked so the key has to be on this side of the door, and he can't grasp it.... and whatever you recommend that will erase this I will take immediately, and more.

But mum is still going on very strong, at 80 she actually can still wield a hack saw out in the garden for a couple of hours at a time, and I don't usually know she's at it until she's dragging the corpses of tree branches into the back yard for disposal by me.

Dad was the handiest guy in the world. He could design and make anything, he could repair anything, and was genius at substitutions for broken or missing parts. Somewhere along the way of course, certain jobs become physically too hard - not that he can admit it, and I'm still fighting a losing battle of stopping him from doing things he really shouldn't do. Just the other day he asked me where the little saw was he could use to cut up some hard roots invading the garden drain. Yes, at 85 years old, previously had two heart valves replaced, got dodgy knees, and a previously broken hip he wanted to get down on hands and knees and hack away at something. Its now at the point where I don't want him to do things anymore, that's to be expected, right? But now I can't even consult with him over how I should do things.

How I discovered this? Well, and this just came up in my Facebook memories from a few years ago, I wrote at the time: My Dad is making an adjustment to my furniture. This involves taking it apart, reassembling it with glue on the screws, dowels and bolts, and adding some support brackets.... but why has he come inside for a box of matches? I am so afraid to ask. Please don't burn my furniture Dad!

That would be about the last time I asked Dad for a favour. I actually sneak around now when I need to assemble something, or book a friend in to help me if I think I can't figure it out on my own.

Of course I'm here to basically do favours for my parents, that would be the service I provide them in return for economical living and a permanent address. Mum just comes straight out and asks me for things, and that is wonderful. Dad asks me in a way that arouses the most fear and dread possible. In the time it takes Dad to get to the point and ask me for a favour, which begins with "can I ask you a favour?" (and then descends into a rambling stroll through the Valley of the Shadow of Death) the sun has shifted significantly in the sky, I have imagined 50 things I hope he's not about to ask me, and a new billy goat hair has sprouted out of his ear. All to ask me if I have change for a fiver.

And those niceties, the little social graces, the supportive parenting statements.... its safe to say those are gone. Not long ago I was showing my mother some new photos of myself, they were nice photos taken so I'd have something to use if someone asked me for one for an article or a feature, of course Dad wanted to be included and asked to see them too. No problem, here you go, Dad.... "you've turned ugly!" he exclaims in horror. WTF? If those photos are ugly there is no hope for me as I am with no makeup and my hair not done the way he sees me every day. Stings a little, coming from my Dad. Oh wait.... he's got massive cataracts and he's not wearing his glasses. Crisis averted. "You can't see properly!" I exclaim "you're not wearing your glasses and you've got cataracts". Oh be fucked, that was the wrong thing to say he flung the photos down and screamed "don't show me anymore pictures then!". And he's the injured party. I won't lie, I was pretty upset after that. Not that he noticed.

And that's why I say that aged care is not for sissies. You just have to get out of bed every day and hide the damn hack saw.

Posted by Starry Strange at 3:30 AM 2 comments: