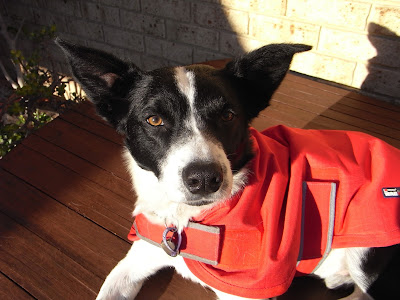 Well you see, its like this. I'm not looking for love as much as I'm just sort of waiting for love to drop a piano on my head. If someone really amazing would come along without me having to make any kind of real effort, I'd be cool with that. That is pretty much the only way that I could be persuaded to change the life flow that I have going on now, that I'm happy with (although more money would also be nice).

However, I did promise my friend, Diane, who has since passed away, that I would make more of an effort, and I did say to her that I had a feeling that I would meet someone really great once I got my dog. You know, the dog that it turns out I've now had for almost 5 years. So maybe its time for a review of my progress (almost none!) and determine whether this is worth changing, or whether I really just want to keep letting the dog drool on my leg while I watch Netflix (every night).

I got myself a really great, Aussie dog, a working dog, nothing too frou-frou or that looks like it should have its diamond encrusted scrawny neck poking out of a designer handbag. A dog that guys respect me for choosing, not saying that is why I chose him, just saying, he is at least not repelling potential dates. I make an effort to never wear leggings as pants, and I'm out there twice a day with fantastic hair, thanks to my hairdresser, Petra (Sapphire Hair Studio, Mandurah) and I'm not shy about talking to men, I can do it. Do I want to?

The first guy in my age bracket (there are a lot of elderly men in my area, and no, I'm not looking to pull an Anna Nicole Smith in spite of suggesting earlier that I'd like more money) literally bumped into me as he walked out of the park..... zipping up his fly. Best case scenario he just peed in the park. Not eligible!

Then I met a great guy with a great dane (my actual favourite breed of dog) and we kept passing each other in the afternoons, until one day he was pushing a pram with twins in it and semi jogging holding hands with (I presume) their mother. Ineligible, move on!

I have to admit I sort of forgot about the whole meeting of a guy thing due to just being busy and happy and not feeling like anything was lacking in my life, you know, I have a life, it has a flow that I enjoy, and I'm not lonely.

Then I met a really kind of cute guy that I started to talk to out in his front yard if he was there when Fizzy and I were walking. We had a good vibe going, relaxed, happy, have a laugh together, no sleazy moments. Then one day I audibly farted. I can't believe I'm telling you this. Anyway I instantly bark out "pretend that was the dog". He sort of paused for a moment and then the conversation resumed until he said "it smells like the dog". And I barked out another instruction "pretend it doesn't smell!" and then mentally heard myself and started laughing (until I cried) saying "Jesus Christ, I'm not high maintenance"

Because I'm really not. Damn flatulence. Ruined my love life. And that's why its just me and the dog, happy together (cue The Turtles) I can assure you, in spite of anything you might assume about my love life, I actually am happy.